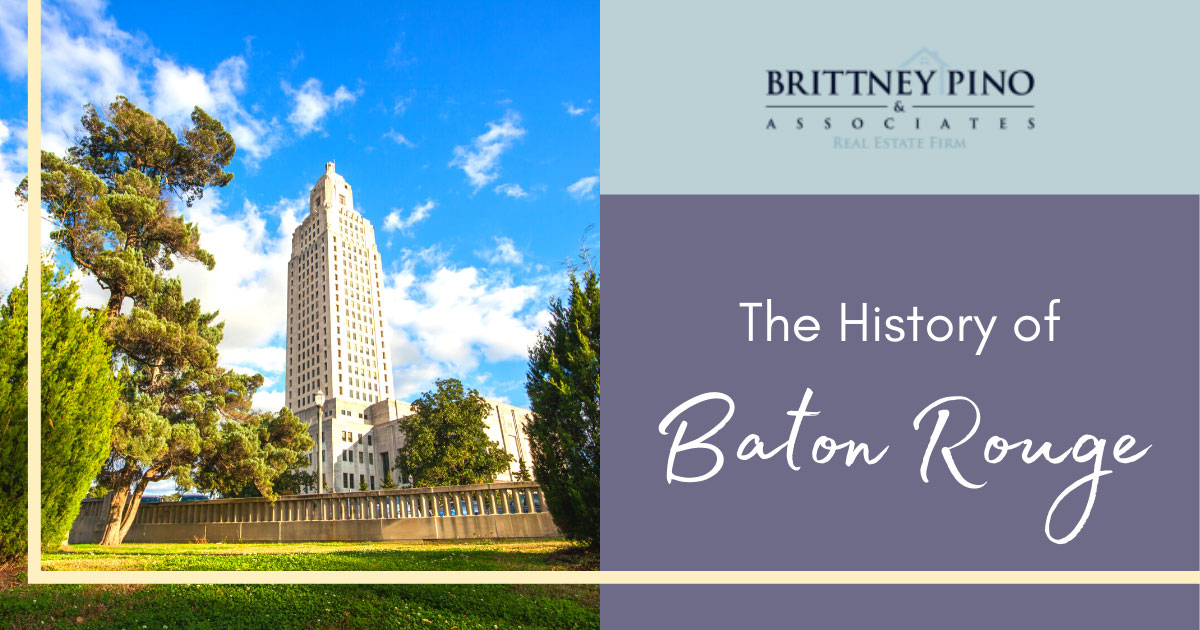 Baton Rouge is famous for being the capital city in Louisiana and being home to the University of Louisiana. However, this city has not always been the modern hub of technology, education, and innovation it has become in recent years. The history of Baton Rouge is diverse and deeply rooted in Native American culture. Whether you have lived in this city your whole life or are just moving to the area, take a moment to familiarize yourself with Baton Rouge's history and its humble beginnings.

Baton Rouge's first residents were Native Americans. The Native Americans belonged to many tribes, including the Alabama, Koasati (Coushatta), Choctaw, Chitimacha, Houma, Tunica-Biloxi, and more. Each of the groups had its own language, culture, and arts.

In fact, many words from the Native American tribes live on today. The Louisiana Parishes of Avoyelles, Caddo, Catahoula, Calcasieu, Tangipahoa, Ouachita, Tensas, and Natchitoches are all derived from one tribe or another. The famous bayous throughout the state come from the Choctaw's word "bayuk." Most of the trade language used in the early years of Baton Rouge's development came from the Choctaw tribe.

The exact date the tribes moved into the Baton Rouge area is unknown. However, the interactions between the various Native American tribes, the French, the British, and the Spanish, shaped the history and development of the area that would eventually become Louisiana's capital.

Much of the tribe's artwork and culture has been preserved in museums. Visitors and residents can find Native American museums throughout the city and on the LSU campus.

Behind the Name: Baton Rouge

The city of Baton Rouge is named for how it was discovered. However, the name has not always remained the same throughout history.

Meaning of the Name 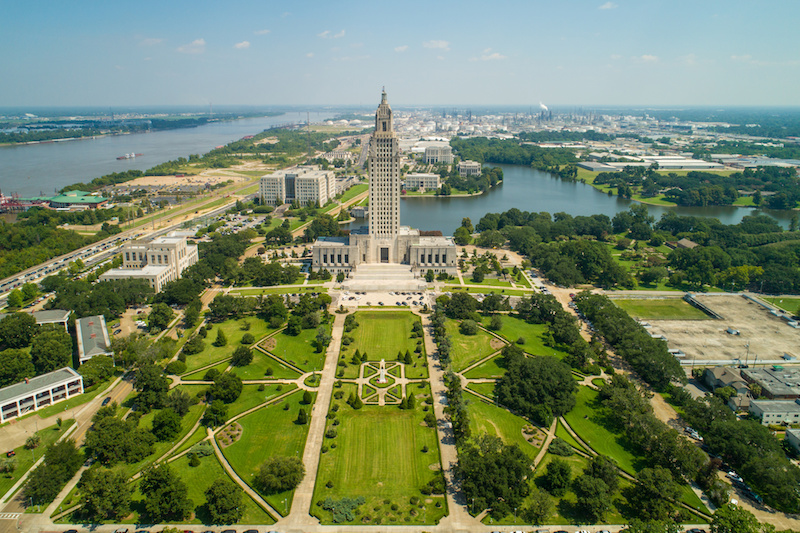 The name Baton Rouge derives from the French language. The name does not surface in history until 1699 when French explorers stood along the river bluff and noticed a boundary marker that Native American tribes had left. The boundary marker was a stick covered in animal blood, which is why "red stick"—in French, "baton rouge"—stuck as the name.

While the French discovered the area of Baton Rouge in 1699, they didn't establish a settlement until 1718. However, after the French and Indian War (1756-1763), the British won eastern Louisiana. Rather than keeping the Baton Rouge name, Captain George Johnstone renamed the settlement as West Florida Colony when he became governor.

The West Florida Colony remained the name of Baton Rouge until 1810. It was not until Americans rose against the colony's Spanish rulers that the name would change. After successfully retaking the colony, the American citizens unanimously voted to return to the name Baton Rouge.

The Colonization of Baton Rouge

The French were the first to colonize Baton Rouge and name the area. After discovering the red stick boundary marker in 1699, French explorer Sieur d'Iberville continued to lead the discovery party. The account of the expedition was recorded and published by carpenter André-Joseph Pénicaut in 1723.

The French would not settle in Baton Rouge until 1718. From there, they established trade with the local Native American Tribes. The French expertly navigated the rivalry between the tribes to avoid as much conflict as possible.

Eventually, the Seven Years' War, spanning 1756 to 1763, would begin between the French and the British. At the end of the war, the French would relinquish control of eastern Louisiana and Baton Rouge to the British.

After winning Baton Rouge, the British moved into their newly acquired lands. They would rename Baton Rouge to West Florida and banish over 10,000 Native Americans from the lands. Unlike the French, the British turned Baton Rouge from a small settlement into a major trading town.

The British successfully maintained their trading hub until the Spanish declared war on the British during the American Revolutionary War in 1779. The British and Spanish would face off at the Battle of Fort Bute, in which the Spanish came out victorious. The British then turned over West Florida to Spain.

The Spanish had control of West Florida for nearly 20 years. The country was successful in its trading ambitions and utilized the Mississippi River floodplain to its full advantage. However, American settlers began to move into the area and were unsettled by the Spanish presence. In 1810, the Americans would rise against the Spanish rule of the territory. When the Americans successfully took the West Florida colony, they renamed the trading hub Baton Rouge. Many Native Americans were already confined to specific parcels of land by the government at this time. 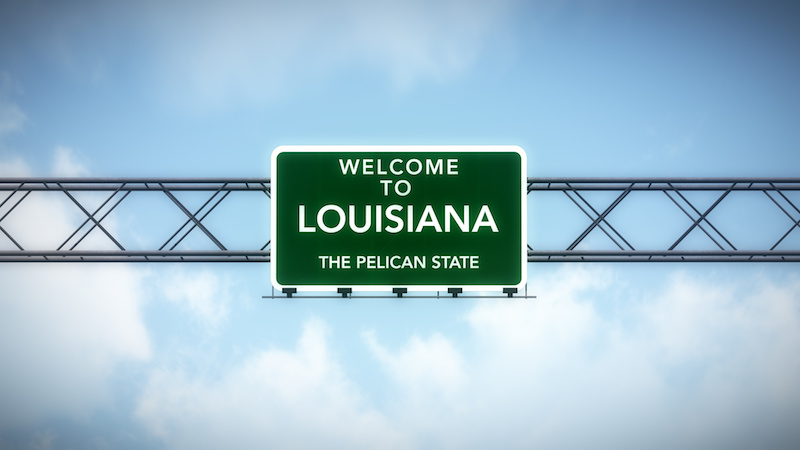 On September 23, 1810, Fulwar Skipwith and other citizens of the area rebelled at Fort San Carlos. After successfully winning the fort, the citizens flew the West Florida Republic flag high in the sky. Existing for only 90 days, the newly established republic and rebellion gave President James Madison just the moment he needed to seize the West Florida colony.

On December 10, 1810, the West Florida colony was claimed as American territory. President Madison was able to execute this victory due to the rebellion organized by the territory's everyday gentlemen. This was the first time in American history that United States borders contained nearly all of the land that makes up present-day Louisiana.

Louisiana became the 18th state in 1812, less than 10 years after the Louisiana Purchase.

Baton Rouge in the Civil War

The battle took place near modern-day Florida Street and the Magnolia Cemetery. The Battle of Baton Rouge lasted throughout the day. Ultimately, the Union won and halted the Confederates' efforts to reclaim the capital.

The Reconstruction of Baton Rouge

Most of the plantations and farmlands in the area were no longer owned by one family. Instead, they were broken down into smaller, manageable units and divided out between high-ranking citizens. Many slaves worked hard to acquire their own lands and reunite their families. These newly freed slaves worked tirelessly to create a life and name for themselves following the war.

The Louisiana State Lottery Company was approved by the state legislature to cover the costs of reconstruction. While reconstruction would last for decades after the war, the lottery helped fund the necessary materials and labor to make small improvements each month. Eventually, larger and more grand buildings would be erected to celebrate the newly mingled cultures of Baton Rouge.

During the Civil Rights Movement, the Baton Rouge bus boycott would be the largest event to occur in the area. With the passing of Ordinate 222, Black citizens were permitted to ride in the fronts of busses if they stayed separate from white riders. After struggles with enforcement of the new law, a boycott was organized and raised over $6,000 in just two days. Rather than riding the bus, Black citizens took taxis and depleted the income of the bus system. The boycott only lasted a few days, but Ordinate 251 was passed; black riders and white riders would fill the bus in opposite directions to create more equality in the transportation system.

This boycott would be the catalyst for citizens to begin pursuing the resolution of other issues, such as the right for Black Americans to vote.

While Baton Rouge's history is primarily focused on events occurring before the 1970s, some notable events have happened in modern history.

Beginning in the early 1970s, Baton Rouge had a boom and expansion of the petrochemical industry. This would lead to mass suburban sprawl and result in a building boom. This industry boom opened the door to creating a business hub for future industries to expand into easily.

After the petrochemical boom, Baton Rouge quickly became a technological leader among southern states. In the early 2000s, Baton Rouge earned the top rank of Most Wired Cities in the United States. The advanced networks and telecommunication towers drove technological advancement, and logistics and trade remain integral to the Baton Rouge economy.

Sadly, Hurricane Katrina hit Louisiana on August 29, 2005. While the storm did not directly hit Baton Rouge, the city suffered from severe power outages. As the city's outages were resolved, Baton Rouge became the headquarters for federal and state emergency relief for the entire state.

Baton Rouge may be home to the LSU Tigers and the state's capital building, but this city is far more than just a business and education hub. The city is home to a diverse history with stories of being turned over to four different powerhouses during its existence. Whether you're looking for a historic townhouse to feel connected to the city or a new construction home to take advantage of its innovation, there are plenty of great places to live, things to do, and attractions to see on your journey to your new home in Baton Rouge. Contact Brittney Pino & Associates with Baton Rouge Home Pros at (225) 444-5664 today and discover your own slice of Baton Rouge history to call home.